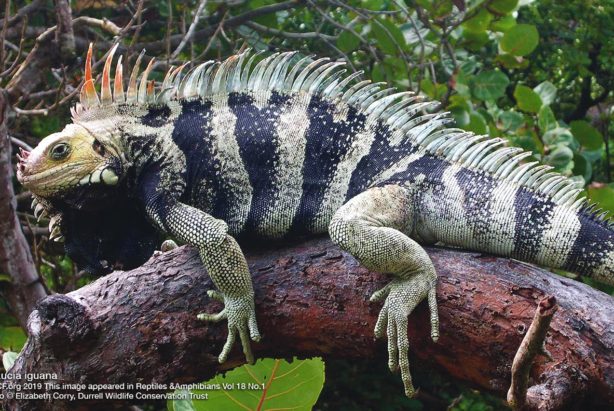 The Lesser Antilles, in the Eastern Caribbean, were long considered to have only two species in the genus Iguana Laurenti 1768: the Lesser Antillean iguana Iguana delicatissima, which is endemic to parts of the Lesser Antilles, and the Common green iguana Iguana iguana, which also occurs throughout Central and South America. No subspecies are currently recognised. However, herpetologists and reptile collectors have pointed out strong physical differences between some of the island populations of Iguana iguana and those from the continent. Drawing on both morphological and genetic data, this paper describes two subspecies of the Common green iguana Iguana iguana from the southern Lesser Antilles, specifically the countries of Saint Lucia Iguana iguana sanctaluciae and Iguana iguana insularis from St Vincent & the Grenadines, and Grenada. The form on the island of Saint Vincent has not been identified. The new subspecies are described based on the following unique combination of characters: Presence of high median and medium to small lateral horns on the snout; Small subtympanic plate not exceeding 20% of the eardrum size; Two or three scales of decreasing size anterior to the subtympanic plate; Fewer than ten small to medium triangular gular spikes; Medium sized dewlap; Low number of small to medium dispersed nuchal tubercles; Dark brown iris, with the white of the eye visible; Oval, prominent nostril; Short and relatively flat head; High dorsal spines; No swelling of the jowls in reproductively active males. Iguana iguana sanctaluciae has in adults vertical black stripes on body and tail and a black dewlap whereas Iguana iguana insularis is pale grey or creamy white in adults. Both subspecies are globally threatened by unsustainable hunting (including the pet trade) and by invasive alien species, including hybridization from invasive iguanas from South and Central America (I. iguana iguana and I. rhinolopha, considered here as full species) that have become established in all three countries. The authors call for stronger measures to conserve the remaining purebred Iguana i. insularis and Iguana i. sanctaluciae ssp. nov. throughout their ranges and for further research to identify other cryptic species and subspecies of Iguana in the Lesser Antilles.