The Little Cayman District of the Cayman Islands National Trust works to preserve and protect wildlife and wildlife habitat on Little Cayman. The species involved include an endangered rock iguana, as well as lizards, birds and rare plants, some of which are found only on Little Cayman. The Sister Isles Rock Iguana (Cyclura nubila caymanensis) is found only on Little Cayman and to a lesser extent the neighboring island of Cayman Brac. The Red Footed Booby Bird (Sula sula) is special as well; the famous “Booby Pond” is one of the most import breeding sites for these birds and so a protected RAMSAR site.

A special target of this year’s Easter Auction fundraising effort involves two pieces of property adjacent to the Booby Pond which the LCDNT has the opportunity to purchase for long term conservation. The properties are important for both the boobies and the rock iguanas, which forage and nest in the area. The area is a potential target for commercial development and this is considered an opportune chance to protect both these important species.

This year’s special goal is to raise CI$125,000 to purchase two parcels of land that are critical nesting areas for the Red Footed Booby Bird. This purchase will expand the protected Booby Pond area. The Sister Isles Rock Iguana crosses this property to access their nesting sites during the mating season.

If your are not attending the Easter Auction or are international, you can donate any amount to this auction via the IRCF website to help expand and protect this critical area on Little Cayman. U.S. donations are tax-deductible. 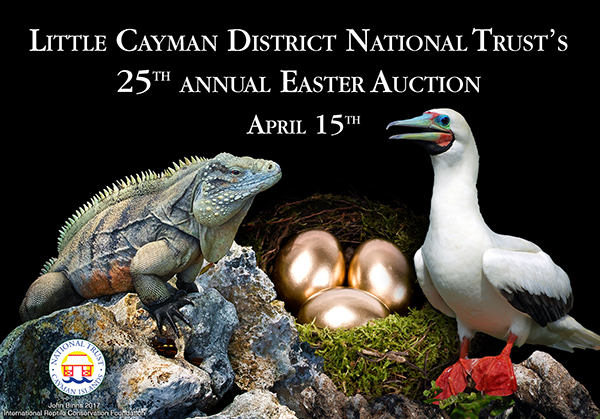