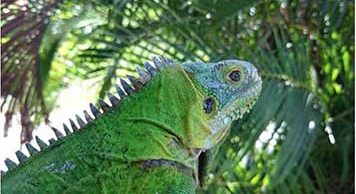 The species is in serious decline, and has been extirpated on islands throughout its geographic range. Therefore I. delicatissima now is classified as endangered on the IUCN red list. A better understanding of these animals can help in effectively protecting them. With little known on the behaviour and distribution of the Lesser Antillean iguana on St. Eustatius, I spent 4 months studying this increasingly rare animal. In the search for iguanas approximately 80-84% of the island of St. Eustatius was investigated. To get an idea of the distribution, total population and biology of iguanas, 286 iguanas in total were caught, which includes work done by Thijs van den Burg. Of these iguanas 195 were beaded and 78 were temporarily marked. Nesting sites, hatchling sightings and the distribution of iguanas has been mapped. These maps illustrate fragmentation of the iguana population on St. Eustatius. We have found that both the Boven-and Quill National Parks have very few iguanas, and thus that the majority of iguanas live outside the park boundaries, which is a major cause for concern. Designating new protected areas might be required in order to save the species on St. Eustatius. Further research is needed on nesting behaviour and hatchling dispersion. Furthermore the beading of iguanas must be continued, and continuously monitored. The culling of feral livestock, placement of artificial nests along with a in situ head starting/ husbandry program is suggested to bolster the current population of iguanas. 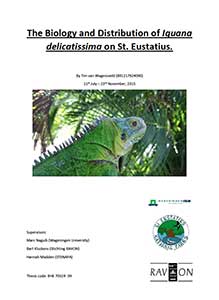