The article “Morphological characterization of the common iguana, Iguana iguana (Linnaeus, 1758), of the Lesser Antillean iguana, Iguana delicatissima, Laurenti, 1768 and of their hybrids” by Michel Breuil was originally published in the Bulletin de la Société herpétologique de France, (2013) 147:309–346 in French. The document details the impact and significance of the invasive Iguana iguana on the populations of Iguana delicatissima in the Lesser Antilles.

To support the dissemination of the document to a broader audience for the purpose of awareness, the International Reptile Conservation Foundation (IRCF), non-profit 501(c)(3), has translated the document into English. While best efforts have been made in the translation, no warranties or representations are made with respect to accuracy of the translation. 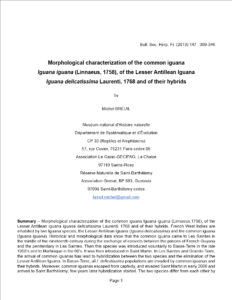