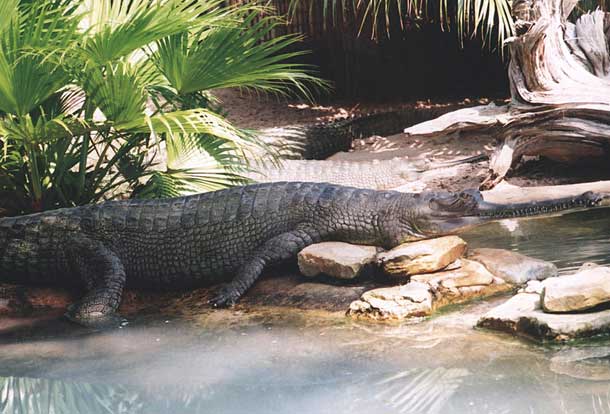 Touted as the most successful conservation story in India for decades, the Gharial (Gavialis gangeticus) conservation program is in the doldrums today, with only about 200 reproducing Gharials remain in the wild. Formerly found in almost every river system in the northern Indian subcontinent, today these large crocodilians are found only in a few protected areas disconnected by hundreds of kilometers. In India, the National Chambal Sanctuary holds about 90% of the surviving gharials. In Nepal, the Rapti and Narayani rivers support a few individuals. The species has been extirpated in Pakistan, Bhutan, Bangladesh, and Myanmar. The Gharial (Gavialis gangeticus) is a unique species of crocodilian, characterized by its long, thin snout and the bulbous growth at the end of its snout. Though millions of years ago there were several similar species, today the Gharial is the last remaining species of this ancient line, the last surviving species of the family Gavialidae.

Once before, in the mid-1970s, the number of wild Gharials had approached 200, triggering the much-publicized Project Crocodile. A head-starting program was so successful that it was touted as the most successful conservation project ever conducted in India and one of the most successful in the world — but little was done to involve local communities in gharial conservation and to secure wild habitats. Today we are seeing the results of that incomplete conservation strategy.

Poaching is a major threat, especially in the National Chambal River Sanctuary, which had been a stronghold of the species for several decades. Fishing depletes the prey base and Gharials quickly drown when enmeshed in nets. Fishermen are not sympathetic to the plight of Gharials, which they view as rivals. Many riverbanks are seasonally taken over by farmers to grow cucumbers and others are destroyed by sand mining. Either deprives Gharials of basking and nesting sites. Water siphoned from rivers for irrigation creates extensive shallow areas that Gharials will not use. Turtle poachers use longlines with up to 1000 fishhooks that ensnare young Gharials.

The Gharial Conservation Alliance (GCA) is an international organization of individuals in a variety of disciplines, who are dedicated to saving gharials from extinction and ensuring the establishment of sustainable wild populations. Conservation efforts of the GCA range from scientific population surveys, captive breeding and wild restocking programs, to education, awareness, and government lobbying. Several international zoos have become major players in gharial conservation through public education, awareness activities, and fundraising campaigns.

Conservation work on gharials has been going on since the late 1970’s. However the recent revelations that gharial numbers are in steep decline indicates that despite the efforts of dedicated individuals the past strategies for conservation have not been effective. Therefore the Gharial Conservation Alliance and its allies are assessing past failures and developing new plans for immediate action to stem the decline of gharials.

Past conservation efforts included extensive captive breeding and “head-starting” gharials for release into the wild. Although captive breeding has been very successful the head-starting/wild-release programs seems to have been ineffective in stemming the decline of gharials, most likely due to the continued habitat destruction and factors contributing to gharial mortality.

Therefore the GCA is now focusing on habitat protection, enforcement of protected areas, education and cooperation with local people as conservation priorities for gharials.

While these new efforts are getting started the GCA and partners are continuing and stepping up population monitoring efforts and ecological research. This population and ecological data will be used in developing and implementing management plans and advising policy decisions by government. All current and past data on gharials is being compiled to create a Gharial Information Database, which will be a valuable tool for future research and conservation work.