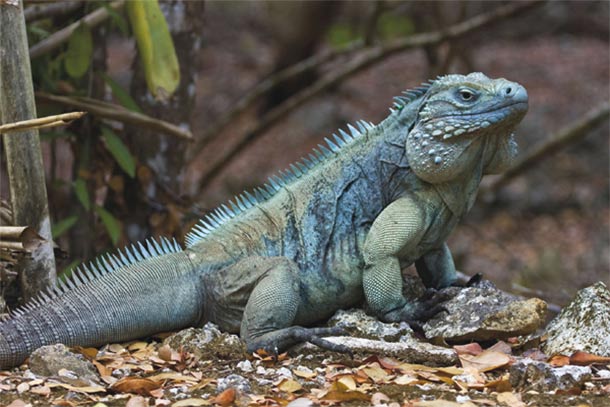 The Blue Iguana (Cyclura lewisi) is Grand Cayman’s largest native land animal. It’s a giant, dragon-like blue lizard which grows to over 5 feet long, over 25 lbs weight, and can live as long as humans!

Originally a denizen of Grand Cayman’s coastal areas and interior dry shrublands, this magnificent reptile was driven to the brink of extinction, with only about a dozen surviving from the original wild population, by 2002.

The main causes of this catastrophic decline range through habitat destruction and road kills, to the deaths caused by free-roaming dogs, and feral cats.

Although these human-caused pressures have led to the Grand Cayman Blue Iguana being the most endangered iguana on earth, we have found that this is one species that can be saved. The Blue Iguana Recovery Programme is making remarkable strides: there is great hope for the future of the Blue Iguana, and its extraordinary wild habitat.

A newly hatched iguana has one great fear from the moment it digs out from the nest. Snakes!

Cayman’s common native snake Alsophis cantherigerus is a very efficient predator of frogs, lizards and baby iguanas. Iguana hatchlings know to avoid them – they make straight for the trees, and disappear from sight. For the first year of their lives, we almost never see them and have very little idea of what they do. It seems that some hatchlings, at least, keep on moving and can disperse over considerable distances. Year-old iguanas have habit of turning up in areas where there has been absolutely no sign of any parents!

In captivity, Blue Iguanas start to become aggressive to each other at a very early age, usually within a month of hatching. If they are not separated into individual cages, smaller hatchlings are soon dominated by bigger ones and not allowed to feed, eventually wasting away. This suggests that in the wild, Blue Iguanas live solitary, territorial lives from the very beginning.

As they grow, they become bolder and more visible. Yearling iguanas often settle down in small territories centered on a safe retreat, still spending a fair amount of time up in bushes and trees. It is hard to tell males and females apart at this age. The adult iguanas usually ignore them, and in any case the yearlings stay out of their way, just to be safe.

At two-and-a-half years of age, the faster growing iguanas become sexually mature and may breed for the first time. As they mature they start to attract the attention of the bigger adults, and may be displaced from areas they were previously tolerated in. Some males seem to manage to disguise their maturation, and look like juveniles or females for several years after maturity. These “sneaker males” are not recognized as potential competitors by the older males, and so can avoid the annual aggression between males until they have grown large enough to be successful!

For most of the year, an adult female Blue Iguana lives a solitary life. She’s a homebody, staying close to her favorite rock hole and defending a small territory which includes places to bask and feed, and an area of soil deep enough to nest in. No other adult female is allowed near: the resident will signal “keep out of my territory!” with vigorous head-bobbing. If that doesn’t work, she will attack the intruder.

The males are less tied to any one place, and often have several alternative sleeping holes scattered around a much larger territory. During the non-breeding season in late summer through the following winter, males live a lazy life, getting up late, eating a lot, basking motionless for hours, and keeping a casual eye on the females within and near their territories.

With the arrival of spring, hormones surge and the pace picks up. Males reassert dominance relationships, testing out who is the biggest and strongest, and expanding their range to try to monopolize as many female territories as possible. Several males will try to control overlapping areas, and so quite often they encounter one another. High speed, long distance chases ensue, with both iguanas hurtling through the shrubland like missiles. The smaller animal almost always flees from the larger, and physical contact is rare unless they two are evenly matched in size. Fights between matched-sized males can be vicious and bloody affairs, with toes, tail tips, crest spines and chunks of skin torn off in some combats.

Throughout March the females keep well out of the way, retreating into their rock holes whenever the males are around. Their eggs are already formed and their abdomens are swollen, but it is not until late April that they become receptive. Most mating is concentrated in the first two weeks of May.

Throughout the breeding season the iguanas take on their most intense blue colour. The males lose weight, feeding little as they devote all their time to dominating other males and breeding. The females also cease feeding as their digestive tract is squeezed by the expanding mass of eggs.

As her receptive period passes, each female abruptly becomes intolerant of all males, and chases them out of her territory. So aggressive does she become, she will successfully run out males much larger than herself! About six weeks after mating, she is ready to lay her eggs, and starts to burrow in the same area where she nests each year.