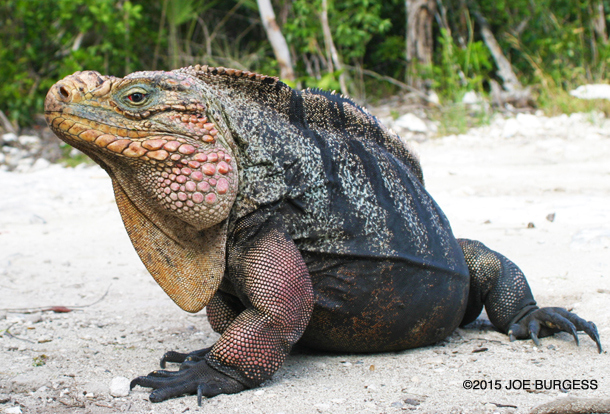 The Andros Iguana is a large Rock Iguana attaining lengths up to 1500 mm and weights over 8 kg. The species is dark grey to black with yellowish-green or orange-tinged scales on the legs, dorsal crest and tail. With maturity, the yellow slowly changes to orange-red, especially in males.

The Andros Iguana is restricted to Andros Island in the Bahamas. This island group consists of three large inhabited islands and dozens of uninhabited cays separated by saline tidal channels.

The islands and cays of Andros are made of jagged, xeric limestone, punctuated by sinkholes. Vegetation consists of pine-forested interiors, surrounded by mangrove swamp, grading into mud flats.

The Andros Iguana is the only iguana in the world documented to deposit their eggs in termite mounds. Females lay 5-18 eggs in a termite mound and will aggressively guard their nests for up to 10 weeks. With very little substrate available on any of the islands or cays, the termite mounds are in many cases the only available choice for nesting.

Large portions of Andros’ natural habitat were destroyed decades ago by large-scale logging operations for Caribbean Pine. Habitat continues to be cleared as the human population of the islands increases. Andros Iguanas are subject to predation by feral animals such as dogs, cats and hogs.

Unlike any other of the island iguana populations, the primary threat to the Andros Iguana is from illegal hunting for food; many of the largest animals of reproductive size are killed and eaten. As populations of Andros Iguanas shrink and become more fragmented, breeding opportunities decrease and genetic diversity decreases. The region is also known to be subject to periodic cataclysmic tropical storms, which have the potential for a devastating impact on the iguana population.

The IRCF and the Shedd Aquarium support an environmental awareness campaign that is aimed at the youth Andros. The local youth soccer league team is called the “Andros Iguanas” and their team uniform consists of bright orange shirts bearing a logo designed by the IRCF’s Joel Friesch. Participants learn about endangered iguanas and enjoy outdoor sports.