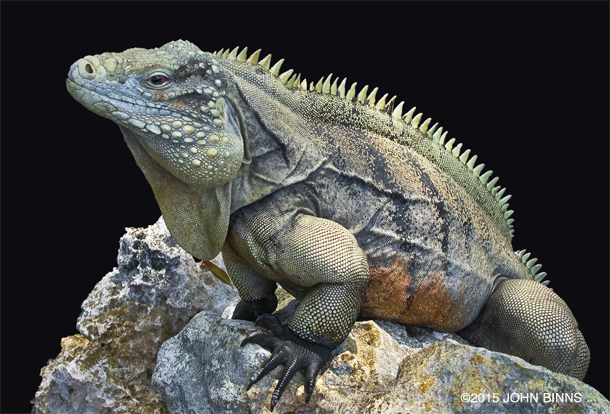 The Sisters Island Rock Iguana (Cyclura nubila caymanensis) is to be found solely on Cayman Brac and Little Cayman. It is a subspecies of the Cuban Rock Iguana.

This large lizard, grey-brown with black markings, has red eyes and a row of spines which run from the back of the head to the tip of the tail. The male is larger than the female and has substantial jaw muscles giving it a very strong bite! They are, however, vegetarian, foraging for fruits, flowers and leaves.

Iguanas never stop growing, although the growth rate does slow down with age. Adults of five feet in length from nose to tail are not uncommon. They are not sociable creatures and tend to live alone, not encouraging others to stay in their chosen area. When feeling threatened, iguanas turn themselves sideways to the foe, draw themselves up as high as possible on their four legs and flatten their bodies laterally so that the area they expose to their opponent is as large as possible. Fierce fights do occur, especially during mating season amongst males who are aggressive from a very early age.

The behaviour of males and females leading up to the short mating season (usually the first two weeks in May) is markedly different. The female selects an area with enough food supplies to sustain her which is also suitable for her nest. This is particularly crucial as the eggs will not hatch if they get too hot, too wet or too dry. Males, on the other hand, roam widely and can cover the territories of many females, ready to mate with each as they come into season. Much of their time is spent warding off rivals, which means that the largest and strongest of the males mate most frequently. This behaviour continues into late May, until all the females cease to be receptive and the males gradually loose interest.

Six weeks after mating, the female will excavate her nest in a patch of earth and lay her eggs which are about the size of a hen’s egg. Young females lay fewer eggs in a clutch than mature mothers who can produce as many as 15 or 20 eggs at a time. The tunnel leading to the egg chamber is carefully filled in and disguised with leaves, grasses and other debris. The female then guards her nest site for a few more weeks to ensure the safety of her brood. The whole process takes a lot out of the iguana and by this time she can be quite emaciated and gaunt. She must roam more widely to feed and build up her strength again. This explains to a large extent why females are never as large as the males.

After an incubation period of about ten weeks, the baby iguanas start to hatch. At birth they are already about eight inches long, having been curled up tight inside the egg. The hatchlings wait until all their brothers and sisters are also hatched, each drawing nourishment from its egg sac, before exiting the nest using their joint strength to dig their way to the surface.

Once out in the open air, they quickly scatter into the undergrowth. Each must then fend for itself. The young iguanas are very vulnerable to birds and snakes (their main predators) at this stage, although they grow extremely fast.

It is a sad fact that the major problems facing Cayman’s iguanas are human related. When the first settlers arrived on Cayman Brac about 200 years ago, they brought their domestic dogs with them. The dogs soon learned that killing iguanas was an exciting way to get an extra meal. A once abundant iguana population has now been reduced to a few tens of survivors. Now another domestic animal threatens to be the death knell for the iguana population on Cayman Brac: feral cats are now found in huge numbers, and they eagerly pursue juvenile iguanas.

Happily, Little Cayman’s iguana population remains healthy, with about 2,500 animals roaming throughout the island. But for how long is uncertain. The same pattern of development that has almost destroyed the iguanas elsewhere can be seen beginning here too, and at a much faster rate. Coastal nesting habitat is being taken over by housing development, feral cats are becoming established, and the first dogs are now resident on the island. Increasing traffic on the roads is killing several adult iguanas every year. If preventative measures are not taken soon, it is inevitable that Little Cayman’s now abundant iguanas will follow Grand Cayman’s Blue Iguana to the brink of extinction.

Wild iguanas are an important asset to Little Cayman’s tourism market, and so should be recognized as having an indirect, but substantial, economic value. If such assets are to be retained to provide ongoing benefit to everyone, it will be necessary to retain significant natural areas of Little Cayman undeveloped, to implement strong measures to prevent uncontrolled breeding of cats and roaming by unrestrained dogs, and to enforce conservative speed limits on all roads to minimize the risks of road kills. It is ultimately for the people of the Cayman Islands to decide whether they wish to keep the native iguana and other vulnerable wildlife as part of their natural surroundings, and whether they are prepared to accept reasonable limitations on development to make this possible.

The tiny iguana population surviving on Cayman Brac is too small to be regarded as viable in the long term. It may eventually be possible to restock Cayman Brac with iguanas from Little Cayman, but this would be doomed to failure if the original causes of the decline on Cayman Brac are not controlled. Before Cayman Brac’s iguanas have a hope for recovery, a concerted effort to reduce the thousands of feral cats, many living in hunger and misery in the woodlands, must first be undertaken.

This fund has been established by the National Trust for the Cayman Islands to purchase nesting habitat for the Sister Islands Rock Iguana (Cyclura nubila caymanensis) on Little Cayman.

The Sister Islands Rock Iguana is under increased threat as island wide development continues. New studies show a dramatic decline in the Little Cayman population faced with a loss of nesting and foraging habitat, skyrocketing road kills and predation by dogs and cats.

Coastal habitats, which are required by these iguanas to breed successfully, have declined sharply due to land clearing and road construction, making land purchase essential for their survival. With support from Durrell Wildlife Conservation Trust, field work has been carried out and the largest communal nesting site identified. This site has been targeted for purchase as a matter of urgency as it supports the largest subpopulation in the west end of the island.

Fundraising efforts are well underway and through the dedicated efforts of a small group in Little Cayman, almost half the required funds are now in hand. However, with the nesting site comprising 2.74 acres of pristine coastline, the site is very attractive to possible hotel or condo developers and is unlikely to remain on the market for very long. Recognizing the urgent need, and the fact that a great many visitors to Little Cayman are from the United States, the International Reptile Conservation Foundation (IRCF) have once again come to the assistance of the National Trust, and donations to this fund are now tax-deductible for US residents through the IRCF.

Once this purchase is completed, infrastructure and interpretative materials will be provided at the site to explain the life cycle of the iguana, its relationship with native plants and its importance to the island’s biodiversity. This will provide an enhanced nature tourism experience to the island’s visitors as well as a living classroom and educational resource for local children.