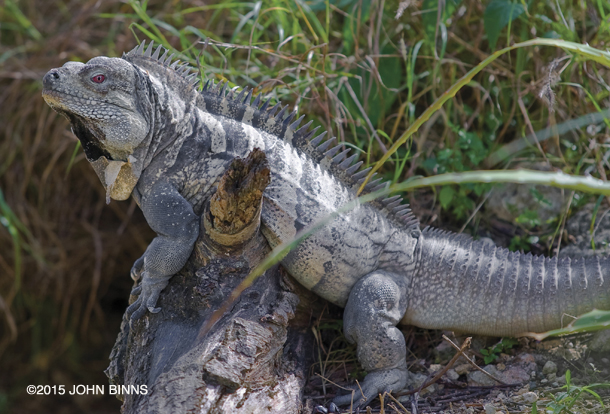 In 2002, a Species Recovery Plan (SRP) Workshop for C. ricordii was organized by the IUCN Iguana Specialist Group (ISG) in Santo Domingo. The workshop produced a Ricord’s Iguana SRP, which was published in 2003 and further revised at a meeting of the Ricord’s Iguana Recovery group in 2004. Based on the SRP, a consortium of institutions initiated activities for the conservation of Ricord’s Iguanas in the Dominican Republic. Indianapolis Zoo and ZooDOM focused on the iguanas in the Isla Cabritos National Park, whereas Grupo Jaragua, with IIF support, concentrated their efforts on the other subpopulations.

C. ricordii is considered to be critically endangered by the IUCN. Decline in numbers and decline in area of occupancy have been observed in all the habitats where the subpopulations are found; massive habitat destruction is well documented, including the unchecked charcoal industry in Haiti. Other threats include predation by introduced predators, competition from mammalian herbivores, and exploitation as a food source. At the beginning of this year, one of our very experience field assistants in Pedernales reported sighting a species of iguana, and potential competitor, not indigenous to this island. This will be further investigated. The fragmentation of C. ricordii subpopulations, when compared to the more widely distributed C. cornuta may be one of the detrimental factors threatening the future of Ricord’s Iguanas.

Recent socioeconomic studies conducted in Haiti reveal that exploitation is a major problem in a country where there is no protection for wildlife. Data from surveys conducted in Anse-a-Pitres confirm that a percentage of the population are regular hunters of iguanas, and an even larger percentage of those surveyed consume iguana meat. The scarcity of the species in Haiti is quite alarming; these animals are rarely seen, and their nests are few. It is likely that the population in Haiti will decline much more rapidly than previously thought. An update of the status of C. ricordii is currently in progress by our conservation team on the island and a zoological team at the Indianapolis Zoo.

Ricord’s Iguana (Cyclura ricordii) is ranked as critically endangered by the IUCN and has an extremely limited distribution with isolated subpopulations. Known only to exist in the south-central part of the island of Hispaniola, the species is restricted to the arid Valle de Neiba and the most xeric portion of the Peninsula de Barahona coastal lowlands. The total range of occurrence of Ricord’s iguana on Hispaniola is under 100 km2, most of it showing various levels of disturbance. In Haiti, the species was thought to be extinct until 2007, when intensive investigation revealed a few Ricord’s nests along a small strip of beach in Anse-a-Pitres, a town located adjacent to the Haitian-Dominican border. The species lives in sympatry with the Rhinoceros Iguana (Cyclura cornuta), which is still widely distributed throughout Hispaniola, including some of its offshore islands. C. cornuta is considered Vulnerable according to the IUCN Red List. Hispaniola is the only island with two Cyclura species and therefore constitutes a special challenge regarding conservation.