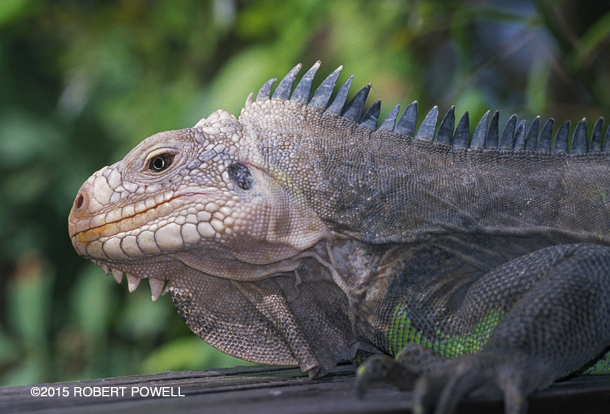 The Lesser Antillean Iguana is a species of iguana that is endemic to the Caribbean. Historically, Iguana delicatissima is believed to have existed throughout the northern Lesser Antilles, from Anguilla to Martinique. The species has experienced dramatic declines since European contact, causing the extirpation of some populations and the severe decline of others.

This means the Lesser Antillean Iguana has since been extirpated from Saint-Martin (French and Dutch sides), Antigua, Barbuda, St. Kitts, Nevis, and Marie-Galante. Ongoing surveys conducted on Guadeloupe since 2007 suggest that populations have been extirpated from Grande-Terre and Les Îles des Saintes islets. However, individuals are still present along with Green Iguanas (Iguana iguana) and hybrids on Basse-Terre, but biologically viable populations are most likely extirpated. Based on the historical range data, the total population of the Lesser Antillean Iguana has most likely experienced declines of more than 70% since European contact.

Once thought to be present in large numbers on St. Eustatius before European colonization, the population is rapidly declining. Past populations size estimates were about 300 animals in 1992, less than 300 individuals in 2000, and about 425 (275-650) individuals in 2004. A recent population update now estimated to be just a few hundred, and population densities have declined across all habitats on the island since the last assessment in 2004 (Debrot et al. 2013). This is far below the required minimum viable population size of 5,000 animals and means that the Lesser Antillean Iguana is critically endangered on St. Eustatius. 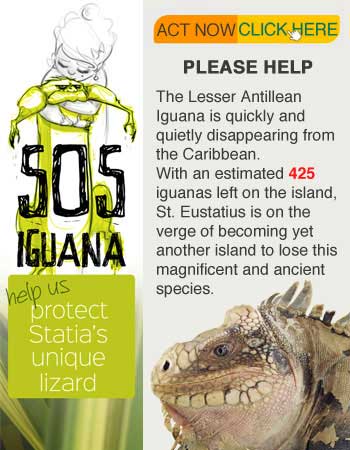 Lesser Antillean Iguanas are impacted by a range of introduced predators. Predation by both cats and dogs is a large problem. Adult iguanas are known to be killed by guard dogs that run free within fenced properties where iguanas move to feed.

Free-ranging and feral browsing competitors are present on St. Eustatius. Goat and cow populations are particular large and of most concern. Extensively overbrowsing continues to cause a shift in plant species composition and habitat structure. Another threat is the ongoing degradation of natural vegetation attributable to the spread of invasive alien species, most notably the Mexican Creeper (Antigonon sp.), which is unpalatable to both goats and iguanas (Fogarty et al. 2004; Debrot et al. 2013).

Hunting is likely a minor problem, primarily because population densities are so low that it is unworthy the effort. Other notable sources of iguana mortalities are starvation (or drowning) in abandoned cisterns and entanglement in fencing.