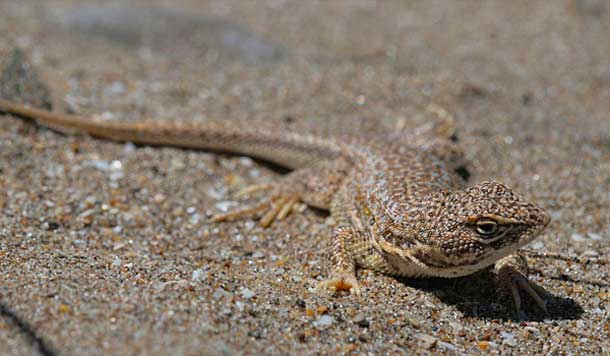 The small Argentine Sand Dune Lizard, Liolaemus multimaculatus, is one of five lizard species occurring in the sand dunes of Buenos Aires Province. However, this Argentine endemic is the only one so closely adapted to its environment that it cannot colonize and survive in other habitat types. Only six disjunct patches of coastal dunes remain in Buenos Aires, and all are faced with excessive and irrational exploitation with no regard for the environment, leaving the isolated surviving Sand Dune Lizard populations extremely vulnerable.

Although these patches have been declared “Áreas Valiosas de Pastizal” (Valuable Grassland Areas) for South America, with the exception of small portions that have been preserved as Natural Reserves, they are not provided with any differential management focused on the conservation of the habitats and species that live in them.

The marine coastal zone of Buenos Aires province is particularly diverse in natural environments, including sand beaches, cliffs, extensive sand dune fields, and a large brackish lagoon (Mar Chiquita). These diverse ecosystems support numerous native plant and animal species that are threatened to varying degrees. Several of these species are poorly known, and some are in danger of extinction, as is the case with the Sand Dune Lizard.

The primary goals of this project were:
Locating, assessing and monitoring the status of wild populations of the Sand Dune lizard, Providing the general public with clear information about its problematic circumstances, and taking actions to promote conservation strategies for this species in particular and the sand dunes in general.

The results of the proposed studies will permit the identification of priority areas for monitoring and conservation of wild L. multimaculatus populations, as well as evaluate their conservation status.